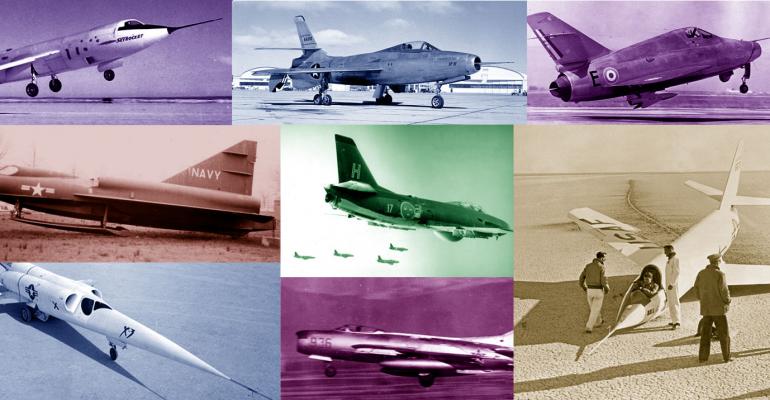 Aerospace engineers went from the Wright Brothers’ first flight in 1903 to supersonic flight in just 43 years, thanks to two world wars and the accompanying advances in metallurgy, motors, and controls. During the subsequent 60 years, more than 120 different planes have flown faster than the speed of sound, or 767 mph (at sea level). Here are the first 10.

The Bell X-1, nicknamed “Glamorous Glennis” by Air Force test pilot Chuck Yeager after his wife, was the first plane to fly faster than the speed of sound. Its four-chamber XLR-11 gave the 6,130-lb. aircraft about 6,000 lb. of thrust. The plane could not take off, get to altitude, and then break the sound barrier. It had to be lifted to a flying altitude in the bomb bay of a B-29 Superfortress, and then released to use its rocket engine to reach top speed. 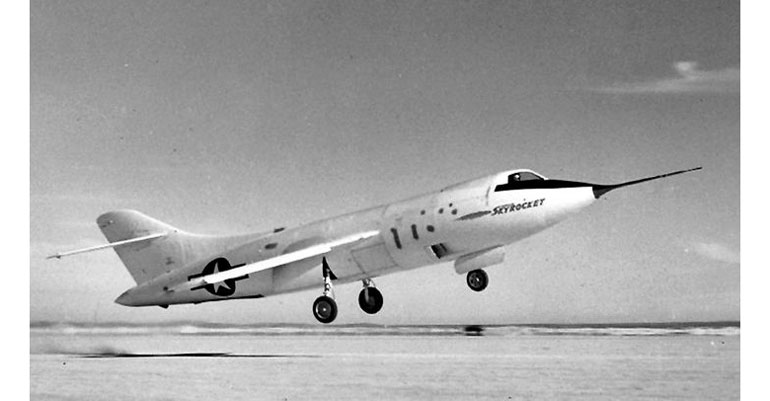 Douglas Aircraft Co. built the Skyrocket for the U.S. Navy. Although the aircraft used a Westinghouse jet engine for takeoffs, climbs, and landings, it took an XLR-11—the same rocket engine in the Bell X-1—to get it to high-speed flight. In 1953, right before the 50th anniversary of powered flight, Scott Crossfield piloted a Skyrocket to a record speed of Mach 2,or more than1,290 mph.

The XF-91 was a NACA experimental aircraft. (The National Advisory Committee for Aeronautics was the predecessor of NASA.) It carried a single jet engine, but engineers added four small rocket engines, enabling it to climb at 30,000 fpm and fly at over 985 mph. The wings were also experimental. They were wider at the tips than the root, a ploy to prevent the wing tips from stalling at the wing tips at low speeds and angles of attack. The wings also tiled, varying the incidence from two degrees down to 5.65 deg. up. 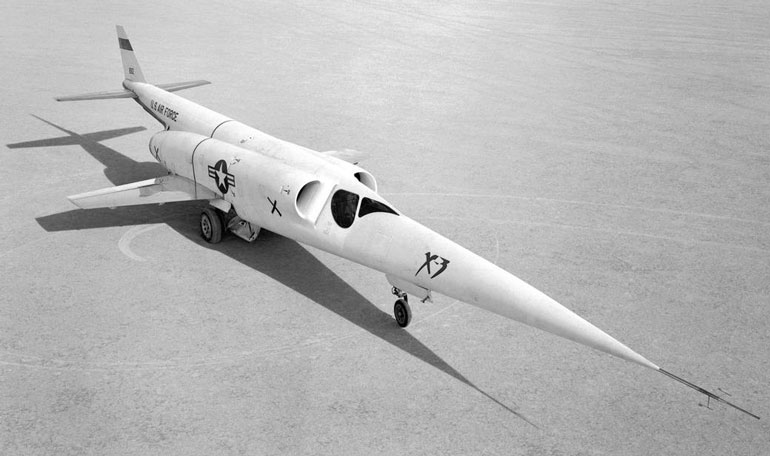 The X-3 was used to test materials that could withstand the heat of high-speed flight. Built by Douglas Aircraft Co., the twin-engine jet was the first aircraft to feature major airframe components made of titanium. Pilots got into the slender aircraft via a seat lift that came down from under the cockpit. The lift also served as an ejection seat which fired the pilot down and out of the danger.

The X-2 was the first rocket plane to have a throttlable engine. Eventually, it went on to be the first aircraft to fly above 100,00 ft.— topping out at 126,000 ft.—and the first to go faster than Mach 3. In this photo, the second X-2 was making its first glide-in landing. But the plane pitched at landing when the nose wheel collapsed and it slid along its main skid, hitting the ground with its right wingtip bumper skid and breaking it off. 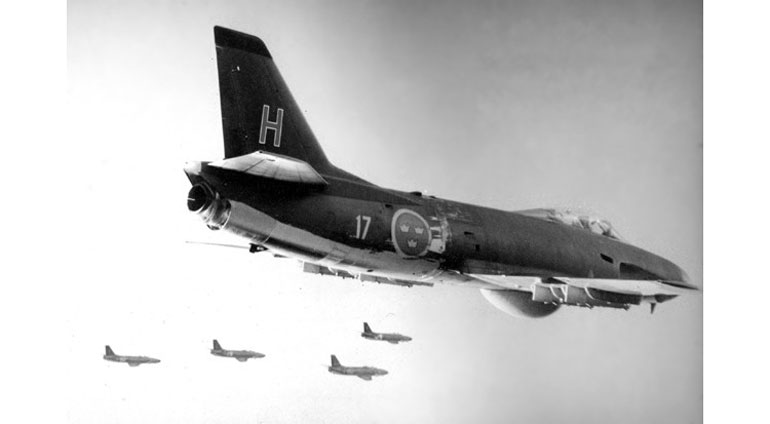 The Saab Lansen (Swedish for Lance) was a two-seat jet aircraft built to carry out bombing, air-to-air combat, and reconnaissance. Four-hundred-and-fifty were built from 1952 through 1960. The military still used a few up into the late 1990s to tow targets and as electronic warfare platforms. Three are still in service collecting air samples for research with the Swedish Radiation Safety Authority. 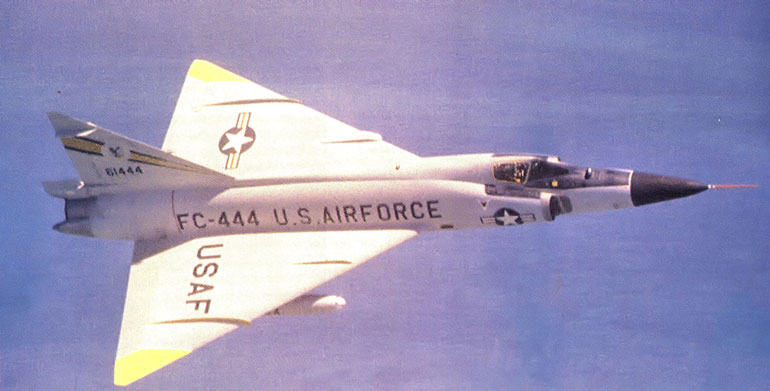 The U.S. built 1,000 F-102s to down incoming Soviet bombers in case of a nuclear attack. It was the Air Force’s first supersonic interceptor. Convair won out over Lockheed and Republic to build the delta-winged plane.

In the 1950s, the Navy was having problems convincing designers supersonic planes could take off and land onboard carriers. To get around their concerns, the Navy asked for a supersonic jet that could take off and land on water—a seaplane. The plane would float in the water with its trailing edges of its delta wings touching the water. Once it got up to 10 mph, its two hydro skis extended, letting it ride  atop the water, gain speed, and take off. Its afterburning engines gave the seaplane a top speed of about 825 mph. The plane performed poorly, however, and was cancelled.

The MiG-19 Farmer was the Soviet Union’s first prosecution aircraft capable of supersonic speeds at level flight. The single-seat, twin-engine jet was first used in the Vietnam War where it went up against more capable F-4 Phantom IIs and F-105 Thunderchiefs. The plane weighed about 16,600 lb. on takeoff and its two engines supplied a total of 11,400 lb. thrust. In afterburner, total thrust went to 14,400 lb.

The Nord Gerfaut (Northern Falcon), the first European aircraft to break the sound barrier, started as a development project in France. It was used to test the aerodynamics of different airframes and wings. It was powered by a SNECMA Atar 1010c turbojet engine that could crate 6,177 lb. of thrust. It could reach supersonic speeds without using its afterburner.