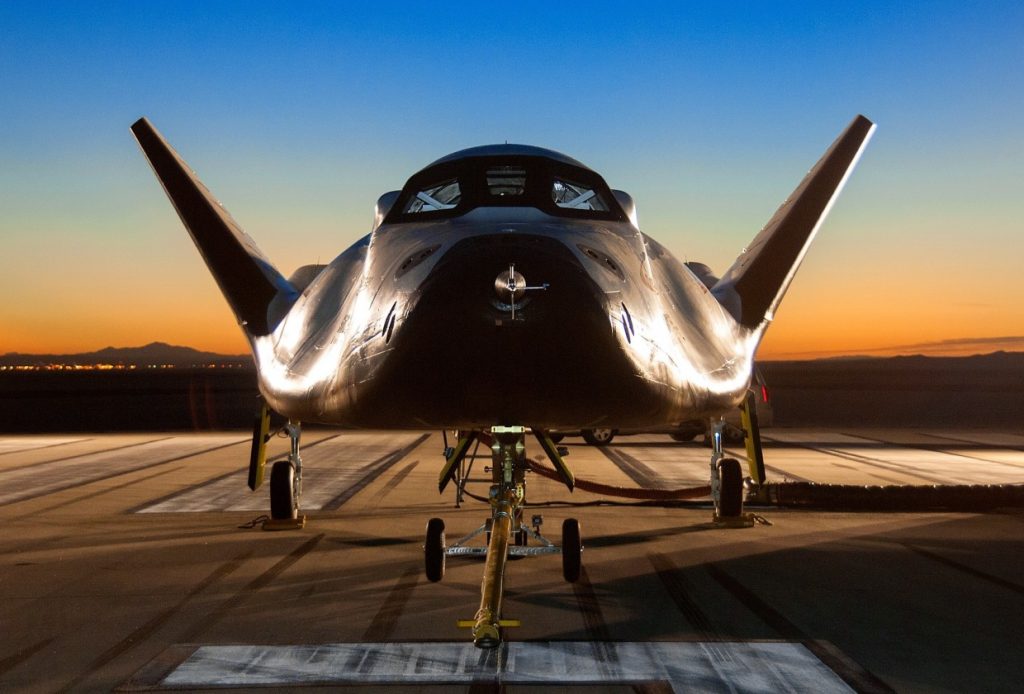 This morning around 7 am, the engines of a massive, beluga-bodied helicopter cut on with a rumble.

The hum harmonized with the reverberations of Edwards Air Force Base, north of Los Angeles. As the Chinook’s two enormous rotor blades started to spin, blasting hot vapor smudged the monochrome stripes of pavement, desert floor, mountain ridge, and sky above NASA’s Armstrong Flight Research Center. And then, finally, the copter began to levitate. As it pulled itself higher and higher, a long tether spooled up from the ground.

At the other end of the rope, a new spacecraft called the Dream Chaser waited for that tether to go taut and pull it from the pavement. Compared to its escort, Dream Chaser is tiny: At 30 feet long, it looks like a Matchbox car crossed with a stingray. But it has outsize ambitions. Its maker, Sierra Nevada Corporation, calls it a “space utility vehicle,” marketing it as a crew and cargo transport to low Earth orbit. After delivery, the idea goes, it will fly down to the kind of runways that line big-city airports. That could make it a uniquely accessible piece of space infrastructure—for NASA, other nations, or even companies that want to try their hands at spaceflight.

During today’s “captive carry” test, Sierra Nevada aimed to see whether its SUV rides as expected at the altitudes where it will later free-fly. But it’s not ready to go that high on its own, so the Chinook lifted it there, flying it around in loops like a parent keeping a hand on the back of a kid’s bike seat.

The Australians, lacking a space program of their own, turned the photos over to the US, and American intelligence officers turned them over to NASA’s Langley Research Center.

Langley engineers took knives to cherry wood, carving out the vehicle that the Soviets called BOR-4. “We were reverse-engineering it,” Del Freeman, one of the employees who’d worked from those photos, told NASA in 2011. “Finally, we got enough information to build a model and we put it into [a wind] tunnel. When we tested it, we really figured out that we had something.”

The Americans called their version the HL-20, imagining it as, among other things, a lifeboat for the International Space Station. But, as so many projects do, this one ended up at the back of a government-owned warehouse. In the early 2000s, though, Sierra Nevada Corporation was searching for a space vehicle design. They visited Langley, blew off the dust, and found one of the most extensively tested spacecraft that had never flown. But still could.

Since then, Sierra Nevada has been transforming the HL-20 into the Dream Chaser: a self-launching, self-flying, self-landing small spacecraft (about the length of a Cessna) that can make 15 or more trips to space and land, after each one, on any commercial runway that’s 10,000 feet long—no Cape Canaveral necessary. The Dream Chaser can heft seven humans or 12,125 pounds of cargo, in a space about the size of a studio apartment.

The Dream Chaser that wound through the air Wednesday morning first came to NASA’s Armstrong Flight Research Center in January, to undergo tests leading up to an actual test flight later (uncrewed) this year. It was on this base that its big-sibling shuttle sometimes landed (54 times!), when it didn’t land at Kennedy Space Center. Armstrong and Edwards occupy southern California’s Antelope Valley, also known as Aerospace Valley (there’s a monument, so it must be true), where Chuck Yeager demonstrated the right stuff and Virgin Galactic’s SpaceShipTwo crashed.

And now, like its predecessors, Dream Chaser is undergoing testing in preparation for its real missions. When it starts its useful life, it will drop cargo off at the ISS as part of a Commercial Resupply Services 2 contract with NASA, signed in 2016. The first delivery will take place around 2020, when a United Launch Alliance Atlas V rocket will boost Dream Chaser toward orbit. Its wings and solar-power arrays will pop out, it will dock with the Space Station, and then, unloaded, it will slide through the atmosphere and land horizontally like a plane. NASA hasn’t contracted with Sierra Nevada to put people aboard, but the idea is that someone (NASA or otherwise) could.

The US’s space agency isn’t the only one interested in this SUV: The United Nations and the European Space Agency, among others, are investigating its use for other future missions. That’s because the Dream Chaser offers relatively affordable, relatively ready-made access to space for astronauts, experiments, and stuff. Plus, it can return not just to Earth, or Earth’s space centers, but to Earth’s airports.

Today, though, it returned to base. After flying up 12,500 feet, the Chinook lowered the Dream Chaser back down. This story will play out again, in a second captive carry test, before the solo flight. The spacecraft’s landing gear popped out of its belly around 200 feet above the ground. Then it wobbled down to the pavement, becoming once again an Earthly object.