Chuck Yeager, one of the most famous test pilots in US aviation history, takes listeners though the development of the rocket-propelled Bell XS-1 / X-1 in which he became the first man to fly faster than the speed of sound in level flight, including taking us through the test flights and politics of the X-1 flight programme. Yeager also discusses the flight tests of the X-1a, Northrop X-4 Bantam and McDonnell F-4 Phantom, then discusses some of his contemporaries in the test pilot seat, including working with Neville Duke on the Hawker Hunter. Yeager finishes off by talking about the Lockheed F-104 Starfighter altitude record and training astronauts to fly the machine.

The interview took place in 1979 and was conducted by Rodney Giesler and was edited by Mike Stanberry MRAeS. 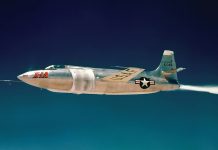 THIS WEEK IN HISTORY – OUT OF CONTROL!

THIS WEEK IN HISTORY – OUT OF CONTROL!