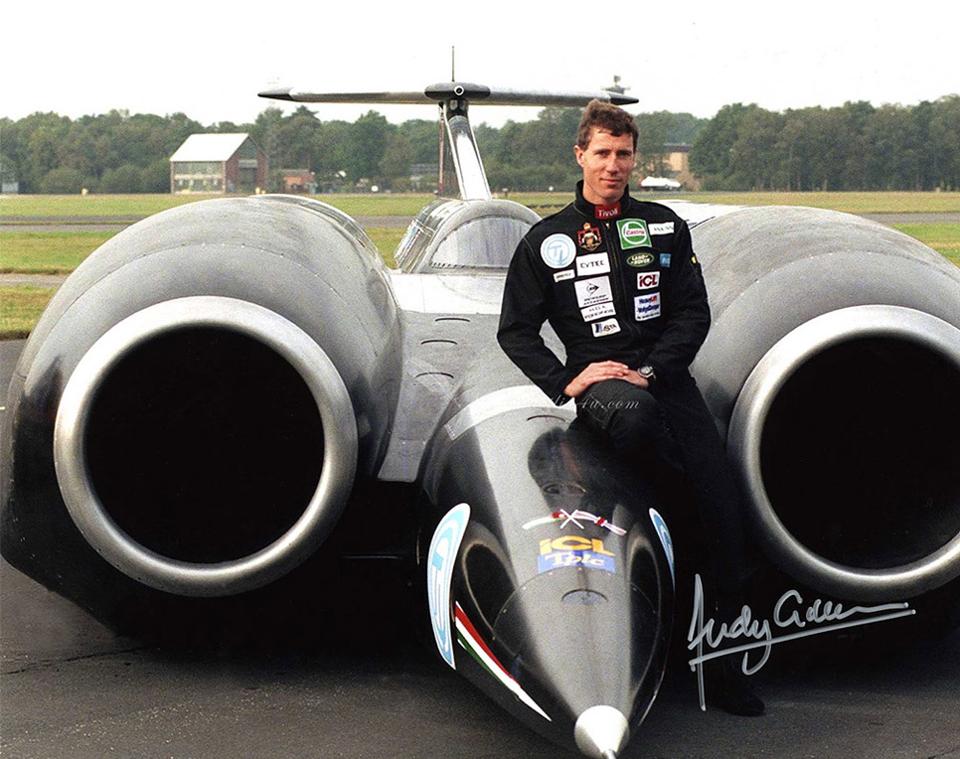 Meet Andy Green, Who Broke The Sound Barrier In A Car And Plans To Go 1,000 MPH Later This Year

As Andy Green prepares to hit 1,000 mph in his Bloodhound SSC jet/rocket car in South Africa later this year, we thought now would be a good time to reminisce about his current world record. In 1997, 50 years after Chuck Yeager became the first man to break the sound barrier in an aircraft, Green did it on the ground! Driving the ThrustSSC car at Nevada’s Black Rock Desert, he set a land speed record of 763.035 mph (average) down a measured mile and back. The mark still stands today.

Andy Green’s Bloodhound SSC car is expected to run 1,000 mph in South Africa. Now Green is planning to break that record in another car, Bloodhound, a massive project in the wings since 2008 utilizing both a jet and rocket engine. After scouting more than 20 locations on four continents, a dry lakebed called Hakskeen Pan in South Africa has been chosen as the venue. If all goes well, the 135,000-hp Bloodhound is expected to run this fall. Following are edited excerpts from a longer conversation with Green about his current world record.

Andy Green: We were at the end of five years of research and development, a huge engineering project. Everybody else had done their bit, and I now had to do mine — not only get the car through the first measured mile supersonic but then help the guys turn it around and drive it back supersonic again — and all within an hour. There were a number of things that had to go right. Quite a lot of those I was influencing.

JC: Exactly. You had broken the sound barrier and land speed record two days earlier, but didn’t get the car turned around within the requisite hour to make the runs count?

AG: We missed by 49 seconds! It wasn’t much, but we had lots of minor delays. This time it all went perfectly, and we had eight minutes to spare.

JC: What were you feeling inside the car as you finally set the record?

AG: Once I have the car going back, accelerating through transonic into the supersonic region, obviously I’m looking at the distance down track to see exactly where we are, exactly what speed we’re doing. I was fairly delighted that we actually got back through the measured mile this time within an hour. Apart from the timekeepers — who aren’t talking to anybody else via radio — I’m the only person who knows we’ve achieved it. But, of course, I’m still driving more than 700 mph in a car I need to bring to rest safely without damaging it or myself. So there’s a focus on delivering the last bit of the contract, which is not only to break the record but to break it safely. Once I’ve shut down the car, I’m just waiting for timekeepers to read out the numbers to confirm that we have achieved the aim.

JC: When watching film of your runs, it looks as if you are driving in an absolute straight line.

AG: Or not straight, as the case may be [laughs]! Because of design limitations with the ThrustSSC, while approaching the speed of sound, I was more than 50 feet off-line at 90 degrees of steering with the car sliding sideways. I was struggling to get it back on line.

JC: When we think about land speed records, we think of the Bonneville Salt Flats. Why didn’t you attempt your ThrustSSC record or plan your future Bloodhound run there?

AG: Bonneville has been used since the early 1930s. It’s relatively easy to get to and also very flat. It was 12 miles of usable salt but now is down to probably 10 miles, nonetheless of very good quality. The problem with salt is that it’s a very, very hard surface. Running at supersonic speed, the wheels generate 30,000 to 40,000 times the force of gravity radially. If you’re running a complete solid wheel [aluminum] on a complete solid surface [salt], you’ve got no grip. The car slides around all over the place.

JC: Got it. So what’s the advantage of a place like Black Rock over Bonneville and why not run Bloodhound there?

AG: The advantage of going to what’s called an alkali playa — a dried-mud lake — is that you get just a bit of give in the surface, and therefore some grip. Black Rock is the largest dried-mud lake in North America and one of the largest in the world. It was perfect in the ‘80s and ‘90s. But I suspect it may have had its time. It suffered with much of America through a long drought not getting flooded, not repairing itself. There’s also an enormous increase in other activities there, notably Burning Man, so it’s been unusable for the last several years.

JC: Other than for a new speed record, why do Bloodhound at all?

AG: We need to inspire the next generation, kids in particular, with science and technology. We’re doing this as a technology demonstration of what is possible — that we can build a 1,000-mph car. Exactly how that works out, we don’t know, which is why we’re promoting it as an engineering adventure, trying to get people to follow it all the way through to find out what problems we’re going to meet, what solutions we tried and how they work out.

‘The Right Stuff’ blasts off for a Veterans Day screening in... 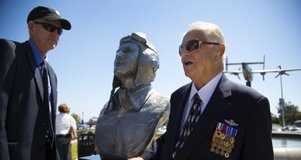