Often, famous people played by movie actors are not happy with the results. But Chuck Yeager had good things to say about “The Right Stuff,” the 1983 movie chronicling the early space race in which he’s played by actor Sam Shepard. The General and former U.S. Air Force pilot also said it was duty to his country that drove him to become the first man to break the sound barrier: Yeager flew his history-making Bell X-1 aircraft at Mach 1.07 on Oct.14, 1947.  In 1953, Yeager again became the world’s fastest airman, taking his Bell X-1A to Mach 2.44.

I had the rare chance awhile back to sit down with the legend, now 93, and he was as feisty and relevant as ever. Just check him out on twitter – he has nearly 50,000 followers! 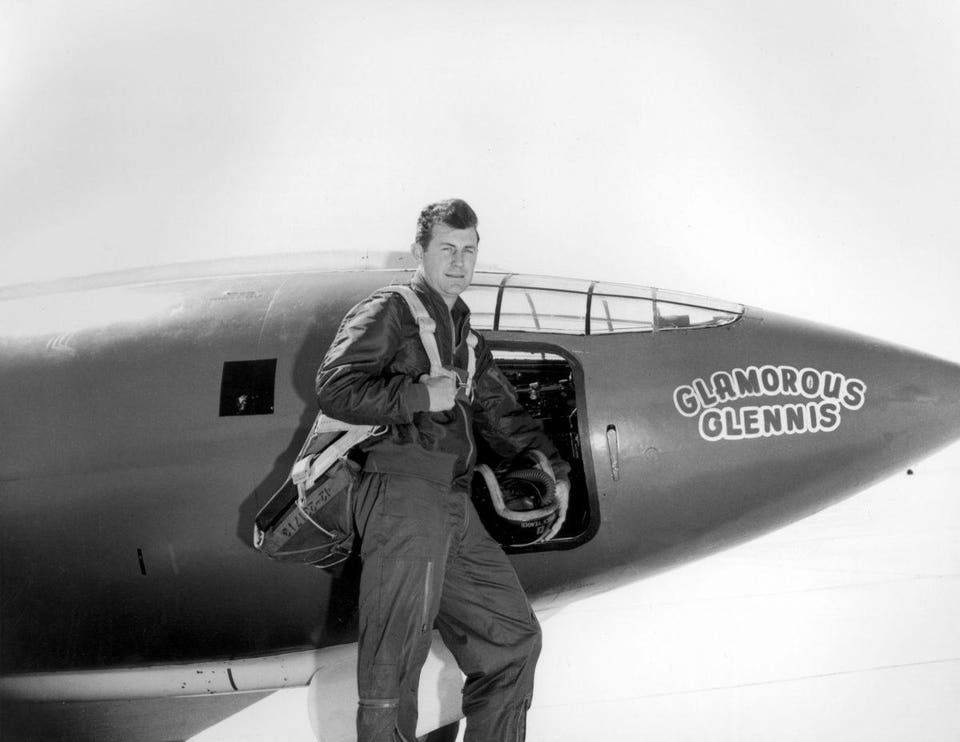 Chuck Yeager with his Bell X-1, the aircraft in which he became first
to break the sound barrier. (Courtesy of Wikipedia)

Jim Clash: What do you think of Tom Wolfe’s book, “The Right Stuff”?

Chuck Yeager: What we had done in the Air Force was being overshadowed by NASA. That’s where Tom Wolfe really shined. In doing a book on the seven Mercury astronauts, he began to see that they got professional PR guys to blow them out of shape. He looked back and saw the guys at Edwards were killing themselves doing research for NASA, but no one knew about it. That’s what made his book so very, very good.

JC: How about the movie of the same name?

CY: It was interesting. I did a lot of flying in it, and Sam Shepard did a good job portraying me. Barbara Hershey looked exactly like [my wife] Glennis, too — wonderful. Though it’s sort of “Hollywood-ized,” the whole story is accurate. I did get burned badly in an F-104 crash. All in all, the movie is educational, and it’s very well made.

JC: Any regrets you were never selected by NASA as an astronaut?

CY: In order to get into the space program, you had to have a degree. I only had a high school education. In the early Mercury program, everything was done from the Cape [Kennedy] anyway. The guys didn’t have a hell of a lot of control, and that to me isn’t flying. I wasn’t interested.

JC: How did you get the flying bug?

CY: I didn’t see an airplane until I was 18. West Virginia had no airports. In 1941, all of us were enlisting in the military because America was mobilizing. I was a gifted mechanic, very talented when it came to fixing machines, so I went to work on planes. But I noticed that, as a mechanic, my hands were always greasy while the pilots’ were clean — and they had good-looking girls on their arms. Flying looked pretty good to me, but, as I said, I only had a high school education and the military wanted college. In 1942, when they weren’t getting enough applicants for the cadet flier program — you had to have two years of college or be 20 years of age — they dropped it to 18 years and a high school diploma. With my visual acuity and understanding of mechanics, I was really a hell of a lot better than the cadets. From there on, I was in the right place at the right time. In combat, I flew P-51 Mustangs and shot down a bunch of airplanes. Basically, that’s the way it worked out.

JC: Take me back to 1947, after World War II, as you readied for your historic Mach 1 flight.

CY: We didn’t know if we could break the sound barrier, but it was our duty to try. That’s your life in the military, to do your duty. And we just didn’t get in the airplane and go. We worked up to it gradually, with nine powered flights. The X-1, being so powerful and being a rocket, had a capability that no other airplane we’d ever flown had. But at Mach 0.94, there was a lot of shock-wave turbulence, and we lost use of the elevators. But we also found that by using a movable horizontal stabilizer, we could control the plane above Mach 0.94. From there on — just a couple of more flights — we had it made. And once above Mach 1, the supersonic airflow over the whole aircraft made flight incredibly smooth. That’s one of the biggest things that came out of the whole X-1 program: If you’re going to fly at supersonic speed, you’ve got to have a slab tail. It took the British, the French and the Soviet Union five years to find that little trick. The breakthrough gave us a quantum jump over the rest of the world in aerodynamics.

JC: Your feelings at the moment you flew faster than thunder for the first time?

CY: The needle jumped off the scale, past Mach 1, and I was almost disappointed that the damn thing didn’t blow up! Not really [laughs]. It was a lot easier than we thought it would be. I’ve fired hundreds of bullets at supersonic speeds. I really didn’t have any apprehension, because it doesn’t do a damn bit of good to feel that way.

CY: You’re wasting your time. It’s like religious people say: “When you get into trouble in an airplane, don’t you pray?” No, God can’t help me. I’ve got to help myself. You never give up. And that’s basically the way you look at it. You can get yourself into a position where it’s impossible to get out. Well, obviously you’re going to die then. If you die, you don’t know anything about it anyway. You don’t look it at that way. You either die or you don’t. And I didn’t.