Hoover was a World War II fighter pilot, a former Air Force test pilot and the chase plane pilot for Chuck Yeager when he broke the sound barrier for the first time.

One of the greatest pilots in the history of aviation died this morning, according to reports.

Bob Hoover, a World War II fighter pilot, a former Air Force test pilot, and the chase plane pilot for Chuck Yeager when he broke the sound barrier for the first time, was 94.

Having been shot down over Nice, France in World War II, Hoover spent 16 months as a POW, spending much of the time in solitary confinement as punishment for two dozen escape attempts. Finally, he succeeded just before the end of the war by stealing a German fighter.

Had he remained at the POW camp a few days longer, the Allies likely would have reached him. But now he faced possible extinction at the hands of any friendly pilot who would presume his Focke Wulf was manned by the enemy.

Hoover said he hugged a cloud ceiling at about 4,000 feet, figuring he would duck up into it if he was spotted by any Allied aircraft. He planned on flying west until he saw signs of Allied territory. “I wanted to see windmills to be sure,” he explained. That would signal friendly Holland.

By the time he reached Holland, Hoover said, “My gas tank was registering close to zero.” He chose to land while he still had full control of the fighter, and selected an open field. Hoover dropped the fighter’s landing gear and settled in.

A ditch suddenly loomed ahead, and Hoover said he did not want to end up trapped in a German fighter on its back, where the Allies might not realize an American was inside. He said he “just reached down and sucked up the gear” to get the fighter to stop before tipping into the ditch.

Hoover said he wondered, “What the heck are you going to do now?” He didn’t have to wait long. “All of a sudden pitchforks came at me from every direction,” Hoover said. Dutch farmers who spoke no English were understandably angry with the man who emerged from the German fighter.

Providence intervened in the form of a British Army truck approaching. Hoover queried the truck’s occupants: “I hope you can help me. I’m a Yank; they think I’m a Kraut!” With perfect British aplomb, the soldiers whisked Hoover to safety.

Hoover said he did not consider his actions in escaping to be heroic. “I was no hero. I didn’t do anything but be stupid,” he chuckled. Hoover said, “It’s a stupid story. For about a year and a half I wouldn’t tell anyone that story.” But word got out years later at an air show, and Hoover acknowledged his feat, albeit with disarming self-criticism. 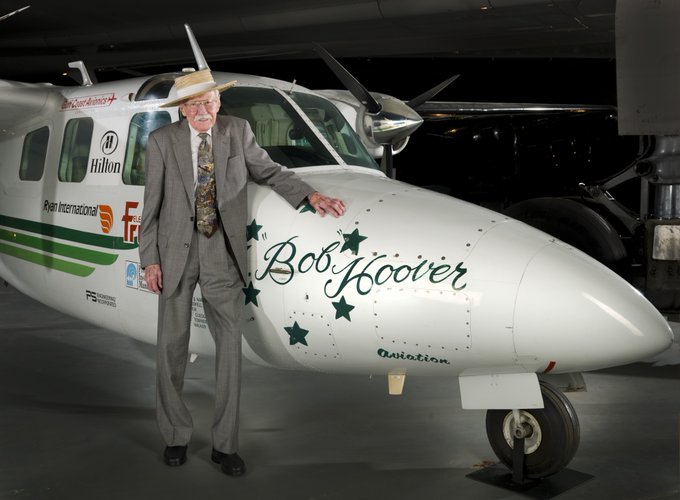 A few years ago, the Federal Aviation Administration tried to ground Hoover, saying he was too old to fly.

“Possibly in the entire history of the conduct of the airman medical certification program, no one decision has created more controversy,” federal air surgeon Jon L. Jordan wrote later.

Aviators throughout the world shrieked with outrage until the FAA relented. Many of them had seen his famous air show act, which he performed with both engines on his plane turned off.

In 2012, a pilot in a P-51 ran out of options when his landing gear malfunctioned. He’d tried everything to deploy it but nothing worked.

Officials tracked down Hoover by telephone, then patched him in to the pilot of the stricken pilot.

“Boot enough rudder there at landing gear down speeds, get a side load on it, it would force it out and into the locked position,” Hoover said. “I’ve been there, I’ve done that a couple of times.”

Jeanes, on the phone from Dallas to Hoover in Los Angeles, encouraged Gardner to keep trying the maneuvers over Mobile Bay. “Just slip it, skid it, yaw it, whatever you have to do to get some air under the door.”

It worked. The landing gear deployed and the pilot landed the P-51 safely.

In 2010, Hoover delivered the Charles Lindbergh lecture at the Smithsonian Air & Space Museum.

With his death, it’s safe to say the nation will likely never hear first-hand stories like this again.

Years before I learned how to fly, I remember we were driving back East — probably 1992 — and as my wife drove I was reading the Star Tribune account of the big Oshkosh air show, which I’d never attended. I recall reading aloud to her the description of Bob Hoover’s performance, in which he shut off both engines to his plane and then spent the next — I don’t know — what seemed like 10 or 15 minutes flying close to the ground, pulling up, rolling, diving, and eventually landing and rolling to a stop exactly at show center.

It is the first and only time in my life I’ve read a dispatch in a newspaper, or anywhere else, and couldn’t believe the wonder of it all. I was like a kid from 50 years earlier, reading about the exploits of larger-than-life people like Lindbergh.

The first time I saw Bob Hoover fly I was a new show pilot standing next to the great Curtis Pitts and hoping for words of wisdom. It was March 1972, and Pitts and I were watching the airplane he created perform at Miami’s Tamiami Airport. The sky was a frenzy of tiny Pitts Specials panting through snap rolls and outside loops. It was noisy, and Pitts said nothing during the performance. Even after the airplanes landed and Hoover taxied out, Pitts was quiet—until Hoover, on takeoff, rolled the twin-engine Shrike Commander. It was as graceful and fluid as a cat stretching its back. The show tempo shifted from salsa to whipped cream. Pitts turned and grinned at me. “Have you ever seen anything so smooth?” he asked.

For the next 20 minutes, we watched North American Rockwell’s big, beautiful cross-country transport flow through giant loops and vertical climbs, four-point rolls and half Cuban eights. Two engines roared, then only one, but the airplane kept dancing. When the second engine stopped, the roar became a glider’s whoosh. The airplane swept past in a deadstick loop, followed by an eight-point roll, then waltzed down to the landing: LEFT two-three, RIGHT two-three, LEFT two-three—the wings banked steeply as one tire kissed the runway, skated, rolled, then lifted as the wings banked the other way, and that wheel skated, rolled…. “Now that’s flying,” Pitts said to me as Hoover, still without power, maneuvered up the runway and onto the taxiway, stopped precisely at show center, then climbed out in his business suit and waved his straw hat at the cheering crowd.

Hoover once demonstrated how to pour ice tea while he rolled his airplane, spilling not a drop and inspiring other aviators to try the same thing with varying results.

“We lost a true, one-of-a-kind aviation hero today,” Jack Pelton, the CEO of EAA said today. “We all knew of Bob’s incredible aviation career and witnessed his unmatched flying skills. It was Bob Hoover as a person that also made him legendary. He was a true gentleman and unfailingly gracious and generous, as well as a good friend of EAA through the years. We can only hope to use his lifelong example as a pilot and a person as a standard for all of us to achieve.”

“Bob Hoover brought great richness to the aviation experience, and he leaves behind a legacy of heroic caring and sharing with the general aviation community,” Mark Baker, the president of the Aircraft Owners and Pilots Association, said. “The first time I met Bob, I was seated next to him at an aviation event, my 8-year-old son by my side. Bob both spoke and listened to his aviation dreams. He offered encouragement and some great stories. And though my son is long since grown, neither he nor I have ever forgotten that an aviation legend gave a child who dreamed of flying his full attention and encouraged him to dream even bigger. Bob Hoover was so much more than a great pilot. He was a great man and a model for what our community can and should be.”

His plane resides in the Smithsonian’s Air and Space museum.